Who is Kontominas – the businessman that is not a saint? 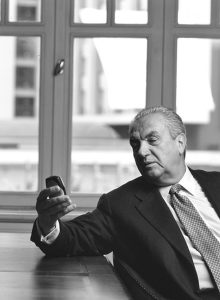 02.02.2012 The Greek billionaire Dimitris Kontominas, which “Transparency International – Macedonia” claims to be involved in major corruption scandal of “Deutsche Telekom”, one year ago has re-directed his business arrows towards our country. First his involvement was with the project “Skopje 2014” by buying land on the square Macedonia baroque for building a baroque hotel and “officer’s home”, a project for which the firm Kontominas “DEMKO” was the only bidder and got an area of 6308 square meters for about 630,000 euros.Kontominas then tried, unsuccessfully, to involve in the energy business by participating in tenders for the construction of hydroelectric plants in Macedonia.

Kontominas in Greece applies for a mysterious businessman, around who there are many unanswered questions. Some media describe him as a businessman that the church would not declare as a saint because of his activities. The Greek billionaire is not unknown to the Macedonian public. He is the father of the Greek insurance company “Interamerican”, and in Macedonia he is famous as the owner of the company “Kosmotelko” which took part of the shares in the “Macedonian Telecom” and received national license for WiMax, broadband. According to the company profile published in “Kathimerini”, “Kosmotelko” had a 7.4 percent shares in the “Stonebridge Communications AD”, a company controlled 51 percent of the “Macedonian Telecommunications”. Kontominas had a land, about 22,000 square meters near the hotel “Aleksandar Palace”, where he had plans to build a large shopping and business center, but this was an idea that failed because the land through restitution was returned to owners. The Greek businessman remained in tenuous situation for several years, because he was waiting the refund of the money that he paid for the land. As many media were writing back in 2006, Kontominas was planning  to open a bank and insurance company in Macedonia.

The other reasons why Kontominas is associated with Macedonia are the projects in the telecommunications and media sector, which he did not finished. This was the reason why the Greek journalists were intrigued by his interest to participate in a project in the energy field, an area in which Kontominas has no experience, as well as a construction and project plan for “Skopje 2014”, which the Greek government has sharply criticized as part ofirredentist policy of Macedonia. After the announcement of the tender for hydroelectric plants, some of the Greek media had a dilemma whether this investment has a similar political background of a Greek investment boom in Macedoni, like it was few years ago. The Portal “Protagon.gr”, citing sources from the Greek Foreign Ministry, announced that the former Prime Minister George Papandreou received a bid through which it was suggested that the Greek investments in Macedonia will affect for a faster resolution of the name dispute because those that are making the decision on these investments require financial support. According to the portal, several people involved in the Greek investments in Macedonia managed to persuade former Greek Prime Minister Costas Simitis that such investment and activities will help to change the position on the Macedonian name dispute. “Not that at some point we came to a point for a compromise on the name, but the cooperation of the ‘Deutsche Telekom’ with a Greek businessman was part of the investigation in Bonn for unconventional payments to politicians in Skopje, which ended without anything to prove,” wrote Protagon.gr.

The Relationship between Kontominas and the Greek political parties is a great enigma too. In some media texts notes it is sad that in the recent years he has collaborated with New Democracy, although originally he had strong ties with the socialist PASOK. However, his association with New Democracy falls into water, because his television “Alpha” deals extensively with the scandal with church land “Vatopedi” which was one of the stronger shocks that shake the government of Costas Karamanlis. He had a rule that he does not want to interfere with any particular political option,  he is beyond the political parties and keeps  his own business interests.

Currently he is again highlighted in Greece for the redemption of the  television “Alpha”.Although the television was for many years in his hands, in 2008 the German “RTL” bought 70 percent stake in this TV. His name is connected again with “Deutsche Telekom” during the negotiations  with “RTL” adding comments that the German television had very close ties with the German telecommunications giant. Apparently due to large losses, “RTL” again recently sold 70 percent stake to Kontominas and he is again a full owner of the television. Apart from “Alpha” Kontominas has the TV “Channel 9” and several radio stations in his own hands.