The fog that covers case Telekom suits them all 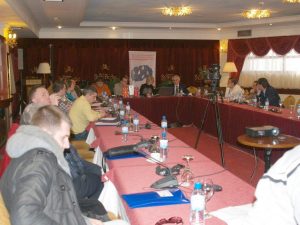 17.02.2012 The institutions for persecution are not interested in resolving the bribery affair with Telekom, said Slagjana Taseva, the President of “Transparency International – Macedonia” on the round table that was held in Skopje.  Few weeks ago, this nongovernmental organization has offered analyses of the affair and discovered that the Greek multimillionaire Dimitris Kontominas was involved in the bribery of the Macedonian politicians from the coalition between SDSM and DUI.
– We expected that what we offered would be developed and used for deeper research about what happened from 2000 onwards, from the privatization of one monopoly, which after its transformation continued to be a monopoly. That means that someone was having a concern for everything but not for the interests of the citizens. The institutions are not having pressure by anyone so they can seek the culprits of the affair and the question is will we agree that it should stay like this? – said Taseva and emphasized the situation is interesting because after the published findings, neither one political party declared to discredit them, as it is usually the case.
media_coverage_of_the_case_telecom
Professor Gjorgji Spasov, who was one of the participants in the discussion, felt that in this case, nobody is interested to resolve this affair.
– The opposition is constantly repeating that the government is unable to resolve this case and that is perfect with them, while for the government’s best interest is not to individualize the case, not to find the concrete perpetrator, but to blame the whole opposition  as a criminal structure .
But Macedonia  needs to close this affair because if you search on Google in English you can see 880,000 texts, in which we, as a country, are mentioned in negative context. Ultimately, why none from Macedonia did not ask Americans to give us evidence in which Macedonian politicians were accused? – Spasov asked.
The reason for the round table that was organized by “Transparency International – Macedonia” is their analysis of how the media contributed to the research on this topic.
“After 40 days of journalistic effort, the media have not published any specific name of a public official or political party in Macedonia, which will be, at least, severely indicated, suspected as a participant in a corrupt bargain with the affair ‘Telecom, ” it is said in the report of the organization.
The data prepared by “Transparency International – Macedonia” shows that this topic was published in 140 newspaper articles, of which only 23 were with research details. Only 76 percent of the journalistic writings on the subject were just ordinary news reports, while only nine percent of them had research moments. According to the analysis, research approach had only the daily and the weekly “Focus” and “Utrinski Vesnik”.
Source: Daily Journal “Focus”
Category: News18/02/2012
Сподели на
Share on FacebookShare on Facebook TweetShare on Twitter Pin itShare on Pinterest Share on LinkedInShare on LinkedIn Share on WhatsAppShare on WhatsApp