There is still no sufficient control for the political financing 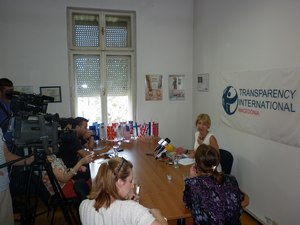 25.06.2012 Following the announced reports from the State Audit Office and reticence of the Government regarding the publishing of the GRECO report for compliance with the recommendations for Republic of Macedonia adopted on the 56th Plenary Assembly held in March this year, it becomes obvious that there is no necessary political will for effective control over the political financing.
The institutions which have the function to monitor and control, and by their nature should be independent, such as the State Audit Office (SAO), the State Commission for Prevention of Corruption, are engaging in the practice of selective and conscious misinterpretation of the laws.
If the behavior of the Public Prosecutor is added to this, when in the campaign that finished, he did not recognized appropriate provision of the criminal code for initiating a procedure, relating the lists of people that were under threat or under a certain promise that was given to them for the voting pro certain political party, has pushed the impression of non functioning of the system for checking and control and further derogation of the rule of law.
Instead of that, a system of absolute power is created which raises the question: Who controls those who are controlling?
The analyses of the reports released by the State Audit Office prove that there is a need for this.
The initial findings of Transparency International Macedonia are the following:
–    The reports published by the State Audit Office on election financing are not in accordance with the laws and standards for audit
–    In its findings the State Auditors failed to obtain their function of supervision and control
–    The auditors did not establish the appropriate procedures that would lead to calling out accountability and punish those that were responsible in the election campaign.
The analysis of these reports will continue in the second phase of the project “CRINIS – Shining a light on politics”, where particular attention will be paid to the financing of the election campaigns.
In the times of state capture or what we call “self sustainable system of corruption” positive changes towards providing a functional democracy and rule of law are possible only through heavy influence by the NGO sector, the media and the international organizations.
As we know, the situation with the media is already marked as worrying, and the civil society is increasingly losing its ability to influence, the only thing that remains are the international organizations and their procedures for assessing the situation in individual areas.
In the report from the 56th Plenary Session of Greco, 13 recommendations were adopted in total and 7 of them were related to the political financing. The report on compliance with these recommendations was adopted in March this year. Under the GRECO rules those reports are public documents, the governments are those who need to translate them and publish them on their official language.
We suspect that the government avoids publishing the report because it contains unfavorable ratings on key issues for the independent control body, which will have mandate, authority and sufficient resources to implement proactive and efficient supervision, investigation and enforcement of regulations for politic financing.
The State Audit Office according its given structure and mandate does not satisfy these requirements. Moreover, if the practice of acting is evaluated, that the State Audit Office is not fully practicing the given responsibilities.
Another weakness is the mechanism for implementation of the sanctions and the loss of the state funding for the political parties and the organizers of the election campaigns.
On the contrary, The State Audit Office tolerates illegal behavior of those who are responsible for organizing election campaigns, interpretation of laws in a manner that justifies the irregularities, instead of initiation appropriate proceedings, the SAO comments on things for which it has legal obligation to reach a conclusion.
With this press conference we want to point out the importance for a control over the political financing for the creation of a democratic and political environment, as well as reducing of political corruption and other corruption related issues related with politics, which are already occupying a big volume of the systemic corruption.
The inefficient control over the political financing allows a creation of influences that further enhances the syndrome of state capture and absolutism, instead of democracy and rule of law.
The unreleased of GRECO report provides lack of transparency and non-availability for the citizens to see the assessment of compliance with the recommendations. If the assessment was good, of course it would have been of great interest to have input from it in the latest report of the European Commission.
When the assessment is not good, in interest of the government is not to be published. In this way, the assessment of compliance with the GRECO recommendations which has always been important to evaluate the progress of Macedonia in the fight against corruption will be hidden and unavailable to the European Commission and more importantly, to the citizens of the Republic of Macedonia.
GRECO (www.coe.int/GRECO) is a body that functions under the Council of Europe which undertakes activities to access the compliance of the State with international standards for fighting against corruption.
Category: News26/06/2012
Сподели на
Share on FacebookShare on Facebook TweetShare on Twitter Pin itShare on Pinterest Share on LinkedInShare on LinkedIn Share on WhatsAppShare on WhatsApp