The governments should hear the global outcry against corruption 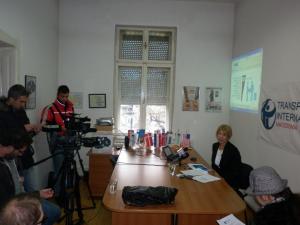 05.12.2012 Skopje/ Berlin – a growing outcry over corrupt governments forced several leaders from office last year, but as the dust has cleared it has become apparent that the levels of birbery, abuse of power and secret dealings are still very high in many countries. The Transparency International index of perception of corruption in 2012 shows that the corruption continues to ravage the societies around the globe.
Two thirds of 176  countries ranked in the 2012 index score bellow  50, on a scale from 0(shows high  corruption)  to 100(shows clean from corruption)  showing that public institutions need to be more transparent as well as the government officials who should be more responsible.
Republic of Macedonia takes the 69 place with a sum of  43 points , which means that the country is again situated  in the group of countries that have grade under 50. In comparison with the countries of the region  Republic of Macedonia has a better rang than Bosnia and Herzegovina, Montenegro, Bulgaria, Serbia , Greece, Kosovo and Albania
short_methodology_note
m._cpi_2012_press_release_presentation_1

The 43 points attained are within the average result from all of the countries ranged and demonstrate a serious indicator that Republic of Macedonia should enforce the activities concerning the fight against corruption , especially in the most sensible sectors, like the judiciary and the politics, which should be a guarantee of the democracy and the rule of law , while insuring prerequisites for development and progress.

Governments need to integrate their criteria of anti-corruption  in all public decision making. Priorities include better laws on lobbing and political financing making sure of a more transparent public spending and negotiating, along with higher responsibility of the public institutions for the people’. Stated Huguette Label, the president of Transparency International.

‘After a year of focus on  corruption , we are expecting more solid position against abuse of power,  from the governments. The results of the Index of perception of the corruption 2012 , demonstrates that the societies continue to pay the high price of the corruption’ declared   Label.

In the most of the countries (in the Middle East, Asia and Europe) where the citizens are challenging the leaders to stop corruption –their stagnation or deteriorate position is notable.

Index of corruption 2012 : The results

In the index of perception of corruption 2012 , Denmark, Finland and New Zealand are sharing the first place with the grade of 90, with the help of an effective accession to information systems and regulations that manage the behavior of officials holding public positions.

Afghanistan , North Korea  and Somalia are again on the bottom of the index list. In this countries the deficit of responsible leaderships and effective public institutions, accent the need to take a more decisive tone against corruption.

The countries of the Eurozone take low level of the performances of the Index of perception of corruption 2012 , because of the financial and economic crises .

‘Corruption is  a frequent problem ‘ said Kobus de Svard, director of Transparency International.’ The world leading economies should be an example for insuring  responsibility of the institutions and leaders. This is a crucial stand point to begin with , since their institutions are playing an important role in preventing corruption on a global scale ‘stated de Svard.
Background

This year Transparency International renewed the methodology of the Index of perception 2012 . To reflect the perception of the index of corruption a scale from 0 (highly corrupted) to 100(no corruption) is presented.

Transparency International is a global Non-governmental organization , leader in the fight against corruption.