You are here:
08.12.2012 On the occasion of 9th of December the World Anti-corruption day, on 8th of December 2012 TI-Macedonia organized a campaign under the motto “Join the Fight against Corruption– Draw a red line “ .  The campaign took place in three cities around Macedonia Skopje, Shtip and Tetovo where TI-Macedonia has its own branches.The campaign in Skopje occurred on locations where there is a huge movement of people, so the action took place on the two pedestrian zones on the ground floor of the City Trade Center-GTC . Citizens, through banners, flayers, conversation with the TI Macedonia staff were informed with our work and activities. Some of them were especially interested in the campaign “ Draw a red line “ and the way of functioning of www.transparencywatch.org.
The whole procedure was elaborate – starting with the demonstration of how can cases be reported, all the way to the reviewing of already reported by using selection of  the location and category.
Join the fight against corruption 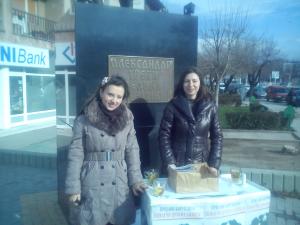 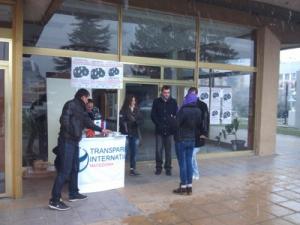 The campaign in Tetovo took place in the downtown of the city square. In front of the House of culture and the central city area, TI-Macedonia staff distributed an informative material with the motto of the campaign.
Category: News14/12/2012
Сподели на
Share on FacebookShare on Facebook TweetShare on Twitter Pin itShare on Pinterest Share on LinkedInShare on LinkedIn Share on WhatsAppShare on WhatsApp