Research: The latest survey show high rate of corruption in education system how can it be.. 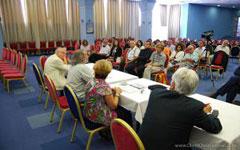 12.10.2012  The State Commission for Prevention of Corruption in cooperation with OSCE and Transparency International Macedonia has conducted a research according to which the education sector , especially the University education is a source  of corruption. 55,1%  from the citizens respondents consider that there is a major  corruption in the country. 56,2% or the biggest part of the respondents consider that the corruption is  most present in the universities. This survey shows that the perception of corruption in this country is above the European average.

In accordance with the State program for fight against corruption, education and  sport are sectors with highest level of corruption and continues lack of   analyses and methodology for perception of corruption . Considering the research conducted by the agency Rejting, the perception of corruption prevalence is highest in the area of High education with 56,2% .
55 % from the current students in universities consider that there is  corruption in the institutions they are being educated in.  Employment in the universities, examination, situating in the student hostels and access are spheres where, according to the respondents, the corruption is the most evident. Despite the fact that the analyze  does not make a clear distinction between the corruption in the public and private universities, the professors that took part of the public debate connected with the above mentioned analyze stood up for the institutions they represent.
‘The way things are organized in the private universities does not leave a place for the professor to be corrupted.  That is excluded during the examination as well as during literature use etc.” stated Dushko Stojanovski , professor on American College. According to Gjorgji Spasov , ex-professor of the State Faculty of Law  ‘St. Cyril and Methodius ‘, the perception of corruption is higher in the private universities because of  high admission fees .’Corruption happens while changing the statute, during the admission process and employment , examination and enrolment ‘ said Spasov . ‘ The path to prevention is : making changes of the examination system, accepting the Bologna standards on high education, transparent election of the staff, sanction to those who offer or take bribe ‘stated Spasov.
The ‘anticorruptioners ‘ will soon make analyzes of the research
The ‘anti- corruptioners’ , state or independent, emphasized that this research has just confirmed  the up-to-now knowledge about the high level of corruption , but the next step is facing it. Robert Georgiev , the major of Sveti Nikole and president of the Commission of education and sport in the Association of the units of local self-government of the Republic of Macedonia -ZELS , admits that it is a public secret that in  these areas corruption flourishes and,  in continuance , he accented  that the pain of the Macedonian society is in the passivity towards the problem . The ‘anticorruptioner’ Mirjana Dimovska is persuaded that the representative research will be helpful for courageously taking  concrete steps.. ‘ The level of illegal and harmful impact  is very high , which is an additional incentive for working with the victims and the ‘corruption whistlers’ ‘declaired Dimovska.
‘There is awareness that corruption exists even between the most vulnerable categories. as it is youth, who are active  in the education and sport, should mean an additional encouragement  for solving this challenge ‘, remarked Slagjana Taseva from Transparency International Macedonia. In the last report from the European commission on the progress of Macedonia it is listed that there is a deficit of analyzes about the corruption and the way of handling with  it. There is a strong law frame , but poor implementation.  The immense remark is the concern over the visibility of the fight against corruption, which, according to the report, is not improving and does not give results.  The commission advised the bodies involved in the fight against corruption to take a more active and coordinative role in corruption sanction.
The commission for corruption prevention announced that the next spheres where the level of corruption will be determined through likewise research, will be the civic sector and the media.
Source: Kapital
Category: News04/01/2013
Сподели на
Share on FacebookShare on Facebook TweetShare on Twitter Pin itShare on Pinterest Share on LinkedInShare on LinkedIn Share on WhatsAppShare on WhatsApp