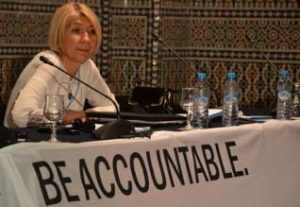 22.05,2013 Andrej Zernovski, the newly elected mayor of Centar, a municipality covering strong center of the Macedonian capital Skopje, announced today that he put Slagana Taseva as head of Commission for auditing
Taseva is former head of State Commission for Preventing Corruption (SCPC) and curently serves as president of Transparency International Macedonia. Dragan Malinovski, also former SCPC head, is member.
Zernovski said that on Monday will ask State auditors to join the Commission.

During the election campaign last month the new mayor blamed the government to be the predecessor of corruption in this project.
“Skopje 2014” consists of many buildings in baroque style and monuments from the Macedonian history. The Project has caused many reactions in Macedonia and abroad. Recently Elizabeta Kanchevska-Milevska, the Macedonian Minister of Culture said that by now the project cost 202 million Euros, while the opposition parties like SDSM claim that near one billion Euros have been spent and that entire project is money laundering and corruption operation.