The Telekom affair: silence in Macedonia 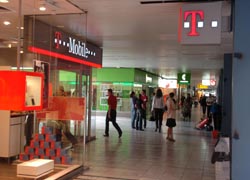 02.05.2013 The Macedonian citizens had been paying their telephone calls several times more expensive than their neighbors had. The monopoly that the Macedonian Telekom was enjoying at the national level generated large profits for the company and for the parties in power. How did the Telekom manage to keep the monopoly at times when Macedonia was working on the market liberalization in all spheres?
The U.S. Securities and Exchange Commission gave an answer to this question. According to the Commission report, the former Magyar Telekom directors, Tamash Marvai, Elek Straub and Andrash Balog had offered large amounts of money in the form of bribery to both governing parties in Macedonia in 2005. Apart from the former directors of Magyar Telekom and Deutsche Telekom, two native functionaries are expected to take part in the hearings; their codenames are “Functionary 1” (Macedonian) and “Functionary 2” (Albanian).

Among the published documents by the U.S. Securities and Exchange Commission, a letter sent by the executive directors of the foreign company is revealed, in which it is stated that in order to prolong the monopoly of the then “Mobimak”, a two-million-Euro bribe was supposed to be paid, whereupon the Macedonian and Albanian party in power would get 1 million each. Another conclusion such as “the support by the Albanian party in power is crucial to get the work done” can also be found in those documents. In the end, after a series of threats and beneficiary offers to the foreign investor, the deal was made amounting at 4 million Euros bribe which was “fairly” divided between the “Functionary 1” (Macedonian) and “Functionary 2” (Albanian).
Based on the provided documents during the research, the legal services house “White and Case” had carried out an internal revision in the Magyar Telecom from 2000 to 2007. This was done because there were suspicions of abuse and misapplication in concluded agreements and payments made by “Price Waterhouse Coopers”.

By the end of 2008, the legal services house “White and Case” handed in the report on Magyar Telekom. This report was also sent the competent legal bodies in Hungary, Macedonia, Germany and the USA.
There is some information by the Ministry of the Interior that 4 people were under suspicion during the period 2005 – 2006 for abusing their official positions, whereupon in five cases they had concluded agreements with “Chaptex Holdings Limited” for services that were never necessary to be carried out. These agreements were concluded by transferring an amount of
3.975.000 Euros to the detriment of “Macedonian Telecommunications” as well as shareholders of the company “Communications Stone Bridge”, which in turn is detrimental to the Macedonian Government as a representative of the state capital of this company, being an owner of 47% of the shares of “Macedonian Telecommunications”.
The trial for corruption in the case of Macedonian and Montenegrin Telekom was supposed to begin on August 8th 2012 but was postponed for later in that month. Then it happened in New York, whereupon three former Magyar Telekom directors, Tamash Marvai, Elek Straub and Andrash Balog had offered large amounts of money in the form of bribery to both governing parties in Macedonia in 2005, SDSM and DUI. Apart from the former directors of Magyar Telekom and Deutsche Telekom, two native functionaries were expected to take part in the hearings; their codenames were “Functionary 1” (Macedonian) and “Functionary 2” (Albanian).
The current Macedonian Prime Minister, Nikola Gruevski gave a statement at which point he said that the citizens have now realized why that had to pay those large amounts of money for their telephone bills while the SDSM was in power, being one of the most expensive telephony providers in Europe at that time.
“It is more than obvious for everyone today in Macedonia why there were no open tenders for a third mobile operator in Macedonia during the four years of the governance by the SDSM, thus ignoring the calls by the citizens and their complaints for highly expensive mobile telephony services.”
Meanwhile, the now opposition party SDSM which was affected by this mega-scandal, notified some months ago that they will also file a criminal charge against the Hungarian company Magyar Telekom for bribery and corruption of high government officials and executive directors of the Telekom in the period 2005-2006. The Albanian party in position at that time, on the other hand, the DUI, has decided to remain silent with regard to this corruptive affair and have never said a word so far.

The reticence of the case in Macedonia

The expert on corruptive issues, Slagjana Taseva, President of Transparency International –Macedonia, did not hesitate to answer to our questions related to this research, although at the time of the discussion she was out of the country.
“Transparency International –Macedonia handed in all the materials they had with regard to the corruptive affair in question to the prosecution on 21.02.2013. This was done in order to utilize as much as possible all the facts for the existing subject, which can also be expanded with new links, new suspects and convicted persons,” Taseva said.
According to her, within the submitted documents to the Macedonian prosecution, there is a copy of the so called “Collaboration Protocol” which serves as evidence in the US and where the suspected persons are mentioned.
“These have not been signed by them, but they contain the names of high officials of the Macedonian Government at that time.”
Magyar Telekom and Deutsche Telekom have agreed not to object the claims by the American Public Prosecution. These documents have been signed but have not been processed within the official archives of the governmental institutions in Macedonia,” adds Taseva.
The trial which is being held in the US is going on the right direction, and according to Taseva, it will continue by the end of April of this year.
On the other hand, some legal experts in Macedonia though asked and contacted in relation to this corruptive affair as to why the legal competent bodies in Macedonia waited that long and did not initiate a legal process before it was done at the New York Court, they remained silent and even rejected to discuss about it. The prosecution has not said a word in public yet with regard to the proofs and facts that they might have about this affair. Everyone in this country, including the competent state bodies and institutions pretend to be deaf and blind against this huge problem.
As to what stage has the processing of this affair reached is not known, since the former public prosecutor in Macedonia, Ljubco Shvrgovski, himself said that he does not own any facts about this issue; whereas in some other occasions he had stated that the affair is almost resolved.
Perhaps many issues and problems and disputes have remained unresolved in Macedonia, especially when it comes to the corruptive affairs in which politicians and government officials are included, thus allowing the public opinion to defile different persons failing to find the effective resolution of these legal issues in this country.