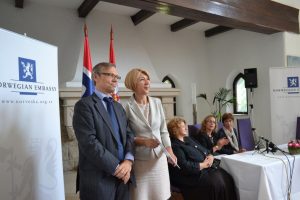 17.06.2013 On June 11, the Royal Norwegian Embassy in Belgrade signed 30 new contracts for civil society actors in Serbia, Montenegro and Macedonia.

The awarding ceremony took place on a special day in Norway’s history – on the 11th of June, on the day 100 Years after Norwegian women got the right to vote.

The gathered representatives of the civil society in Serbia were addressed by Ambassador Kamsvåg Speech at, as well as by three prominent women, whose work demonstrates the importance of women’s participation in public life in Serbia: Mrs. Natalija Micunovic Director of Directorate for Gender Equality Ministry of Labor and Social Policy, Ivana Cirkovic Director of the Office for Cooperation with Civil Society of the Serbian Government, and Milica Delevic, the outgoing Chairperson of the National Assembly’s European Integration Committee and member of the Advisory Board of the Norwegian Embassy.

Out of the 30 new projects, 5 are funded from the Program Strengthening Civil Society in Serbia. These are projects which have started in 2012, and by signing new contracts, the organizations are enabled to continue their work in programs of protection of minority communities, strengthening NGO capacities in Serbia, transposing European practices in the area of environmental protection, protection of asylum seekers etc

The Embassy will support with 300,000 Euros the refurbishment of the Human Rights House in Belgrade, which provides long-term support for 5 civil society organizations. These premises were consigned by the city of Belgrade for use by the organizations for an indefinite period of time.

The remaining 24 projects are funded through the Embassy Fund, the Embassy’s grant scheme that covers Macedonia, Montenegro and Serbia. This scheme is open throughout the year. Selected amongst 104 proposals received in the period March – June 2013, these projects represent an important incentive to NGOs, local communities, media and other partners in the three countries. The projects cover a vast number of important issues, ranging from the rights of the LGBT community in Serbia (Pride 2013), to the fight against corruption, the improvement of the observance of rights of young people, women and children rights, violence prevention and entrepreneurship in education curricula, environmental issues, etc.