Buying Influence: Money and Politics in Republic of Macedonia 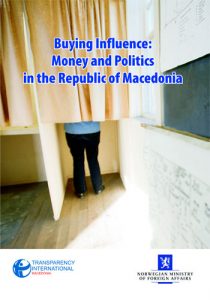 11.07.2013 In Republic of Macedonia there is a weak legal framework and a weaker practice in ensuring the reliability of the financial reports of political parties participating in elections. At the same time there is a very good legal basis but evident weak application of the provisions regarding the transparency and public oversight of the finances of the politics during election.

About the project
In period of three years (2010 – 2013), Transparency International – Macedonia within the Project  “CRINIS– Shining a light on money in politics” conducted two surveys and a series of other activities aimed at raising awareness, improving legislation and practice regarding the transparency of political party funding. The purpose of this project was to achieve a higher degree of transparency and institutional change by involving all key stakeholders and through evaluation of practices that are implemented in political funding.
The project was implemented through the methodology established by the Transparency International, (TI) known as CRINIS methodology, which includes monitoring of two different types of political funding: regular funding of political parties and financing of election campaign for parliamentary and presidential elections.
The results of the first study were presented in 2011, and the results presented in the publication: “Buying influence: money and politics in the Republic of Macedonia”, refer only to the transparency of financing of political parties for the election campaign of the early parliamentary elections in 2011.

Summary:
Money in politics often represents the dark side of elections. The lack of transparency in political finance is jeopardising the legitimacy and credibility of countries democratic actors and processes. Transparency in political funding is needed because a lack of trust by people will destroy confidence in the system and will decrease citizen participation in democratic processes. Ensuring transparency in political party financing is very important, not only for the citizens who vote in elections, but also for achieving a well-functioning system and a strong democracy.
In this regard, reporting to the state oversight agencies is also a very important characteristic of a democratic system. If institutions such as the State Audit Office (hereafter the SAO), the State Commission for Preventing Corruption (hereafter the SCPC) and the State Election Commission (hereafter the SEC) are doing their job thoroughly then it should be easier to detect misbehavior and unreported financial sources. Moreover, detailed disclosure of the donors who fund election campaigns is proven to be necessary to stop money from illicit sources circulating in politics.
Disclosure is a necessary component in any system of public control of political finance and a prerequisite for the enforcement of expenditure ceilings and contribution limits, and also for the allocation of public subsidies. Disclosure requirements are part of a broad set of regulations governing election law in general, but they have a particularly significant meaning when political finance is concerned.

To be effective, disclosure needs enforcement  agencies, administrative capabilities, sufficient budget and educated manpower. Political parties or individual candidates may be tempted to avoid transparency or report a distorted picture of their financial activity for a number of reasons. One reason for a lack of reporting or misreporting may be the receipt of larger donations in cash.

The scale for each indicator ranges from 0 to 10, where 10 indicates that a country has met all criteria expected in terms of transparency and accountability and 0 indicates that none of these criteria has been met. Scores between 0 and 10 are grouped into three evaluation categories: insufficient (0 to 3.3), average (3.4 to 6.7) and good (6.8 to10). According to the results of the survey the most weak dimension is the reliability of reports with an average of 2,9. Next are the dimensions which have average results: Sanctions 3,5; Preventive measures 3,8; Non – state oversight 5,5; State oversight with an average value of 6,5; Disclosure 6,6;  Republic of Macedonia shows better results in terms of the four dimensions as follows: Scope of the reports 6.9;  Reporting 7.5; Bookkeeping 7,6 and depth of  reports 7.8.

According to the results presented in the table can be concluded that political parties in the Republic of Macedonia regarding the election campaigns financing show better results in terms of the legal framework and in terms of practice or implementation of laws, the results are significantly lower. The biggest difference regarding the index points between law and practice shows the dimension disclosure of reports as follows: 9.7 index points in terms of the legal framework and 3.5 in relation to the practice of implementing these laws. Furthermore, a significant difference was observed in terms of the dimension state oversight. Regarding this dimension the laws show result of 8.7 index points while the practice of conducting surveillance over political funding is 4.3 index points. Significant difference between the laws and practice are noted on the following dimensions: Sanctions: 5.3 law vs. 1.7 practice; Preventive measures: 4.8 law vs. 2.7 practice. Minor differences in the comparison between the laws and practice are showed in the following four dimensions: Bookkeeping: 7.7 law vs. 7.5 practice; Reporting: 7.9 law vs. 7.1 practice; Range reports: Law 7.6 vs. 6, 1 practice and depth of reports: 8.1 law vs. 7.5 practice. Dimensions reliability of reports and non – state oversight are perception based and there are no law indicators for them.

1. Improve the performance of the State oversight agencies.
2. Apply the legal provisions more effectively
3. Disclosure of donors and their contributions to election campaigns of political parties.
4. Enable the identification of donations in the form of media advertising during the election campaign.
5. Introduce tax incentives for private donations to political parties.