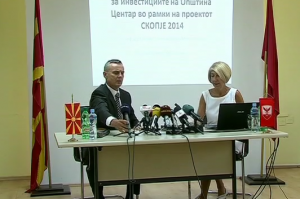 20.08.2013 Fingers are pointed at the municipality Centar and the Ministry of Culture, which, according to Zernovski, worked illegally.

The analysis by the experts Sladjana Taseva and Dragan Malinovski of setting the monuments covered by the project “Skopje 2014” in the municipality Centar detected some serious irregularities. According to them, the allocation of funds for this purpose from the central budget account of the municipality Centar has no legal justification.

According to Zernovski’s announcement, it is soon expected the State Audit Office to audit how the money was spent in the municipality Centar.

It was found that the municipality Centar had no jurisdiction to build a number of facilities. A decision on building memorial monuments can only be passed by the Parliament under Article 3 of the Law on Memorials and Monuments.

“In contrast, in the actual situation all decisions about their placement are made ​​by the Council of the Municipality Center. Thus this organ has violated its responsibilities defined by law. The fact that these objects in individual acts of the municipality Centar (decisions) are entitled monuments (busts, sculptures, fountains and other artistic and architectural works that with their contents mark events and people of local importance) does not change the essence that the community set memorial monuments”, it is said in the report.

Sladjana Taseva says that during the analysis they found many examples in which the value and the type of the memorial that was to be built changed during the procedure.

“The monument of Nikola Karev as by the documentation we have is in marble and we all see that in front of the Parliament it is in bronze”, she added.

With the decision by the Mayor of 03.06.2008 on the casting in bronze the monument of Karev, a particular value of the procurement of five million denars was decided upon. However, on the day of publication of the public procurement announcement in the Official Gazette, the mayor made ​​a new decision to amend the foregoing, in which the value increased to 45 million, with an explanation that this monument should be made in marble and the previously identified resources were not sufficient for such performance.

The mayor of the municipality Centar, Andrej Zernovski, pointed out that the audit he had ordered confirmed his fears that the whole procedure was illegal.

“This document will be submitted to the Public Prosecution as there is a material which they will seriously have to deal with. SAO responded positively to my request and they will seriously audit how the money was spent in the municipality Centar and according to my information they will start it in early September”, said Zernovski.

He also revealed that 57 people at the expense of the Municipality of Centar traveled to Florence, Verona and Milan to learn about the conditions under which the monuments were casted. The sculptor Valentina Stefanovski visited Italy 25 times. The cost of air tickets and accommodation in Italy was incredible 1.5 million Euros.

The ruling VMRO-DPMNE characterized the report as an attempt to manipulate the public “through the use of generic phrases, political qualifications for daily political reasons and they are used whenever there is a lack of facts and arguments”.

“We are calling Andrej Zernovski, as mayor of the municipality Centar, not to waste his time, but if he is really convinced of irregularities in the construction of Skopje 2014 personally or on behalf of the Municipality of Centar to file lawsuits for all the allegations that he and his coalition have for this important project”, said the VMRO-DPMNE councilor, Daniela Rangelova.

The calculated value of monuments in the announcement in many instances differed from the amounts in the signed contracts for the development of preliminary design and models and sculptures, reliefs and contracts for construction of monuments (casting and marble). In the competition for preliminary design for the monument of Metodi Andonov Cento the calculated value of the memorial was four million denars. According to the records of the municipality Centar, the author was paid 9 million denars, and for the sculpture in marble 50 million denars. A total of 65 million denars or more than a million Euros was spent excluding the pedestal costs.