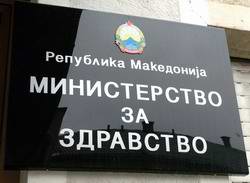 06.11.2013  the final report of the audit office about the financial statements, the auditors noted that the Ministry has not been fully implementing the inventory of assets, receivables and payables, and that there is no harmonization of accounting with the actual condition of the assets, and liabilities of the inventory is formally implemented by taking the data from accounts.

“Due to wrongly implemented accounting principles and guidelines regarding the implementation of accounting transactions and inadequate communications and flow of information and documents between departments, the balance sheet items are wrong, and there are unfounded higher amounts that affects the real and fair presentation of financial statements “, says the report by the State Audit Office.

Due to delays in procedures at the Ministry, the Government still hasn’t approved a permanent use of movable property of the Ministry for one Public Health facility. Therefore, all the equipment has not been introduced in the accounts of individual health care institutions, and depreciation is not calculated for it, leading to the possibility of improper handling of it, the auditors concluded.

In terms of health care programs, the audit office concluded that those responsible for programs were dimensioning the necessary funding realistically, for each program. However, with the adoption of the budget, as in the previous period, in 2012 were granted much smaller amounts of funds, under which the Ministry has prepared programs, despite the fact that they do not conform to the planned activities, and the Ministry will not be able to pay obligations to the institutions through which the programs are implemented .

“Moreover, in 2012 the projected budget for specific programs is reduced and 2,870,777 thousand denars were paid, when most of the activities are completed,” the report concluded.

SCOOP asked the Ministry of Health for comments about the report of the auditors, but so far these are no answers to our questions.

Still, the health minister, Nikola Todorov had a very nervous reaction to the report yesterday in the Parliament. He yelled “I am not a criminal”, to the accusations made by the opposition.

After the MP from NSDP, Goran Misovski criticized the work of the ministry and spoke about the last audit report, Todorov replied that the MP should be ashamed, because he as a minister works for 19 hours a day, and the notes of auditors are due to an error of the accountants.

“You wave here with accusations and make ​​me a criminal. There is nothing more irritating to me than someone accusing me of being a criminal, and you even do it publicly, how could you? You should have little credibility, and moral responsibility, you are attacking a human being. Read the report well and don’t come out with lies just to gain small political points,” said Todorov after which he hit the microphones of the Parliament Boot.