Freedom House: Macedonia in the same category as it was 10 years ago 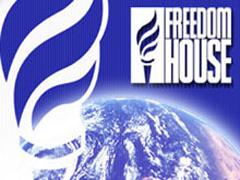 12.06.2014 In its 2014 Nations in Transit Report, Freedom House puts Macedonia in the same category as it was 10 years ago. The issues of significant declination of the media freedom and the deterioration of the legislative and economic environment for independent media are pointed as some of the biggest factors that contributed to this fall.
The country ratings are based on a scale of 1 to 7, with 1 representing the countries with a highest and 7 the countries with the lowest level of democratic progress. In this report, Freedom House gives Macedonia a Democracy Score of 4.0, and places it in the category of Transitional Governments or Hybrid Regimes together with Ukraine (4.93), Georgia (4.68), Moldova (4.86), Albania (4.18) and Bosnia and Herzegovina (4.43).
In terms of categories, which together constitute the Democracy Score, Macedonia in the Freedom of House 2014 Nations in Transit Report is given the following scores: electoral process (3.25); civil society (3.25); independent media (5.0); national democratic governance (4.25); local democratic governance (3.75); judicial framework and independence (4.25); and corruption (4.25).

Freedom House states that Macedonia was paralyzed by the political crisis that erupted in late 2012. The author of the report also mentions the events of December 24th, or “Black Monday,” as the date of these events came to be known, and explores what preceded and followed this event.
Concerns about declining media freedom in Macedonia over the last several years were amplified in 2013 by the arrest and harsh sentencing of investigative journalist Tomislav Kezarovski.

The author asserts that pressures facing Macedonian media and journalists drew significant attention in late 2013, after the arrest and harsh sentencing of investigative journalist Tomislav Kezarovski. She also informs that the government drew additional criticism when it adopted controversial media legislation in a quick, nontransparent process.

Regarding the situation in the Balkans, Freedom House acknowledged a number of positive developments, such as the accession of Croatia to the EU and the agreement between Kosovo and Serbia. For Bosnia and Herzegovina the report states that the central government is paralyzed due to long-term problems. The report concludes makes a note that in many countries in the region, despite the improvements of the civil society sector in the last 10 years, minority rights, especially the rights of LGBT people, remain a serious challenge.

At the bottom of the 2014 Nations in Transit Report, and in the category of consolidated authoritarian regime, Freedom House places Russia, Belarus, Turkmenistan and Kazakhstan.