No role for civil society in Macedonian corruption crises 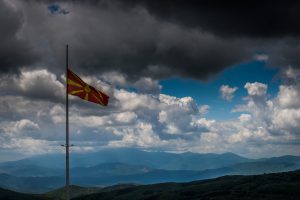 Last February, the main opposition party broadcast the first instalment of a series of secret recordings that purport to be conversations between high-level officials, including the sitting Prime Minister. 35 further instalments of these ‘information bombs’ have kept the nation gripped over the spring and summer. If true, the conversations provide a vivid portrait of a country beset by corruption and abuse of power.
There are discussions about which judges can be relied upon to give a favourable verdict; vote-rigging and fraudulent registration of voters; using public funds to buy luxury cars; and even the kickbacks that can be expected from Chinese construction companies.
None of this would be immediately apparent from the European Commission’s progress report for Macedonia published in 2014, which contains sentences like “the independence and competence of courts also needs to be further enhanced” and “efforts should continue to build up a track record of investigations, prosecutions and convictions in organised crime and corruption cases”. The report concludes that the country is ready to move to the next stage of the accession process.
However, even the Commission could no longer turn a deaf ear to the staggering allegations contained in the tapes, and so in April this year it set up an independent commission to look into the rule of law in Macedonia, chaired by Reinhard Priebe, a former Commission official who oversaw the publication of the EU anti-corruption report in 2014. The Priebe commission issued its findings in June, which makes for some uncomfortable reading for the government officials.
Following intense negotiations in July this year, in part brokered by the European Commission and MEPs, there is now cross-party agreement on implementing the report’s recommendations in full. This will now happen in dialogue with the Commission. Excluded from all of this, surprisingly, are civil society organisations and concerned citizens on the ground. It is surprising because if the recordings are true, they reveal a state apparatus that has been captured by elements that share many of the characteristics of an organised crime group. How you would expect a state to reform itself in these circumstances, without an open and consultative process that involves a wide range of actors, is anyone’s guess.
Transparency International Macedonia along with two important civil society coalitions in Macedonia – Anti-corruption Platform and Network 23 – have issued a statement deploring this state of affairs and once again affirming their willingness to contribute their expertise. The European Commission should heed their call and insist on an inclusive reform process that can revive some of the trust that the “information bombs” have shattered.
Posted by Carl Dolan,Director, TI EU Office
Category: News06/09/2015
Сподели на
Share on FacebookShare on Facebook TweetShare on Twitter Pin itShare on Pinterest Share on LinkedInShare on LinkedIn Share on WhatsAppShare on WhatsApp