The fight against corruption in Macedonia in 2017 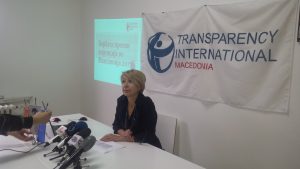 28.12.2017 Transparency International Macedonia on December 28, 2017 held a press conference on the topic “Fight against Corruption in Macedonia in 2017”. At the press conference, Slagjana Taseva PhD, President of TI-M pointed out that “The fight against corruption in the Republic of Macedonia is not at the necessary level to enable the development of democratic values and the rule of law. The escalation of this problem is best reflected in the country’s tremendous decline in the Transparency International Corruption Perceptions Index, according to which it fell for 24 places – from the 66th to the lowest 90th place in the world. This result showed that corruption is a serious obstacle to the rule of law, the development of the economy, investment and democracy. “
fight_against_corruption_in_macedonia_in_2017
The Republic of Macedonia is a society in which relations are based on clientelism. For a long time, a system has been built in which interests rather than law are governed, corrupts are protected and the negative effects of corruption are ignored.
In order to improve the situation, it is necessary to:
– Have well-planned, organized and efficient activity in the fight against corruption involving all stakeholders: the Government, the persecution institutions, the Parliament in its function of supervision and control, independent judiciary free from all influences, non-governmental organizations;
– Reforms in the State Commission for Prevention of Corruption;
– Raising the collective consciousness which should be freed from the spirit of party obedience;
– The government should ensure full independence in the work of other authorities, in the Judicial and Legislative Authority. A precondition for this is to ensure the capacity, professionalism, resources and full independence of the Public Prosecution as a prosecution authority that should and must act independently of the policy;
– Reform of the administration should ensure integrity and personal responsibility with respect to the institutional setting established by the Constitution;
– To enable the smooth functioning of the Special Prosecution as a separate unit within the Public Prosecution in order to complete the already initiated pre-trial procedures;
– A court decree on cases such as “AFIS” and “Banks”, which have been in pre-trial procedure for years. A court decree is required for all cases run by the Special Public Prosecutor’s Office.
Category: News06/01/2018
Сподели на
Share on FacebookShare on Facebook TweetShare on Twitter Pin itShare on Pinterest Share on LinkedInShare on LinkedIn Share on WhatsAppShare on WhatsApp