“Skopje 2014”: At least eight million Euros could have been saved 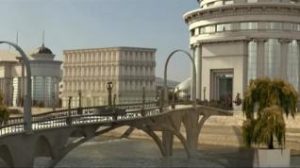 29.11.2013 The procedures for making monuments in the project “Skopje 2014” that were realized through the “Centar” municipality are conducted with serious violations of the Law on Public Procurement, and eight million euros could have been saved only from monuments, if the most reasonable offers were chosen.

These are some of the conclusions of the second audit report for the project “Skopje 2014” that the municipality has ordered from the anticorruption experts Sladjana Taseva and Dragan Malinovski.

According to Malinovski, all tenders ranging from those monuments of Goce Delchev and Dame Gruev, to the ASNOM monument were won by two Italian firms “Fonderia Aristica Fernanndo Marinelli” and “Petro Bazzanti”.

“Indicative is the fact that in all situations where the two companies have won tenders, other providers offered dramatically lower prices than theirs. If you compare the prices of bids in the eight cases when these firms received tenders we get 4.228 million euros. On average bids of firms Fernando Marinelli were two and a half times more and ranged at 153 percent. The amount of 4, 228 million did not enter the calculation for the three other structures like the “Warrior on a horse”, the lions and “Car Samuil” because there were no other bidders. For these three monuments the municipality paid 3,770 thousand euros more that the real price, which means that for these 11 monuments the municipality paid these firms about 8 million euros more than what was offered for real, “said Malinovski .

In the period from 2007 to 2013, for building the monuments and accompanying content from the central budget to the account of the municipality of “Centar” total of EUR 58,023,986.00 were transferred, for which there is no legal justification, the audit report stated.

The audit also noted directly negotiating contracts with authors whose designs were accepted, which were conducted in a way that does not allow checking and verifying the final prices.

“Most of the accepted suggestions of the authors are flat, without a clear specification of costs and as such are not eligible for evaluation. Thus the authors have been paid huge money without being able to see their justification. The municipality “Center” had no adequate control for whether the authors have developed and delivered the models by type and quantities that were contracted and paid by the municipality. It resulted in unsubstantiated payments of funds for authors and the companies that made ​​them,” said Malinovski .

Mayor of “Center” Andrej Zernovski said that he was shocked by the findings of the audit .

“Skopje 2014 by the Government was announced to be the largest project, but it will actually come out as the biggest affair, because these are only moments related to the sculptures that what went through the municipality of “Centar”. It remains to be seen everything else in the rest of the tender procedures and facilities that were built in “Skopje 2014” from the documentation. We could have saved 8 million euros only if they didn’t favoured two companies in Italy that had the same owner. This is a blatant example of illegal and set up procurement,” added Zernovski and announced that he will take the audit report to the Public prosecution office.

In response to the press conference for the review there was an immediate reaction from VMRO -DPMNE who told Zernovski without further delay to file criminal charges against those that according to him, broke the law.

“We also seek the same from Zoran Zaev and Radmila Sekerinska and all the others who in the past five years threw around accusations about amounts of 500 million, 200 million, 2 billion, 100 million, and today they reached 8 million. VMRO – DPMNE will not allow the laziness and lack of idea of Andrej Zernovski and the entire staff deficit and internal problems in SDSM, to be covered with false accusations for the project Skopje 2014”, say from VMRO-DPMNE.