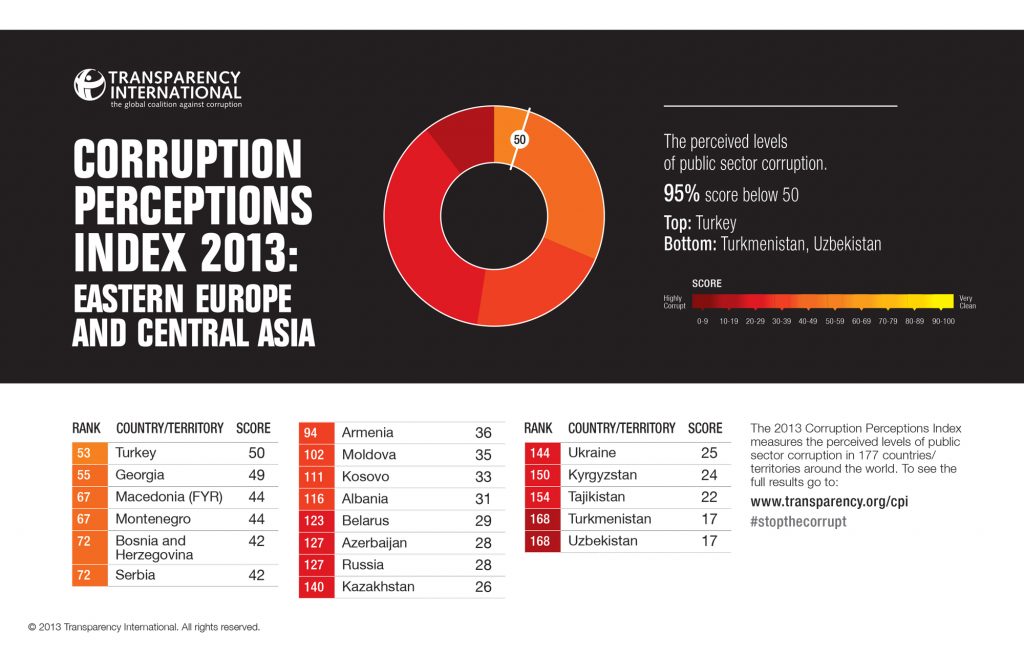 03.12.2013 “Corruption remains an issue of high priority for the Republic of Macedonia. The result of this year on Corruption Perceptions Index 2013 is almost identical with the result of last year (43: 44 index points) and suggests that there is a slowdown in the improvement of the situation in this sphere.
It is obvious that the actions taken by the government are insufficient and institutions are ineffective. Deficiencies in the rule of law estimate a serious distrust on the citizens in the judiciary and parliament, as institutions that should provide assurance in the rule of law, protection of the public interest and state prosperity. The institutions have not provided sufficient guarantee that those who are responsible for corruption and unlawful work will not enjoy protection and impunity. “Untouchability on the responsible people for corruption in everyday life needs to be eradicated,” said the professor Dr. Slagjana Taseva, president of Transparency International Macedonia on the occasion of the announcement of the results of the CPI for 2013.

She urged citizens to join in the realization of the slogan “Zero tolerance for corruption” and to contribute to the lighting and reporting of corrupt practices that should be observed and documented in order to be eliminated. Professor Taseva called the Government by the end of the year to prepare and start with the process of enacting legislation to protect whistle-blowers, which will be implemented after the adoption, not after two years, as the government plans.

Corruption Perceptions Index 2013 (CPI) is the most widely used indicator for measuring corruption worldwide and it is a powerful tool in the fight against corruption. Followed by a rigorous review process in 2012, there have been few significant changes in methodology. This will contribute for the first time that the results of CPI in 2013 have been compared over time. As part of the updated methodology used to calculate the CPI, a new scale of 0-100 in whose assessment within a country/territory shows its level of perception of corruption in the public sector, where 0 means that a country is perceived as highly corrupted and 100 that it is perceived as very clean.
Transparency International’s Corruption Perceptions Index 2013 offers a warning that the abuse of power, secret dealings and bribery continue to ravage societies around the world.
CPI is a composite index, a combination of analysis and assessments of corruption, collected from several reputed institutions in the country, where the ranking shows its position relative to the other countries/territories included in the index. Macedonia by the CPI in 2013 is located at 67 place, with 44 points, apart from 2012 where the 43 points was on 69 place.
According to the Global Corruption Barometer (GCB) 2013 survey which is based on the perception and experience of the people towards corruption, in Macedonia indicates that is a very serious problem with the public sector institution with still high score of 4.1 (on a scale of one to five, where 1 means not a problem at all and 5 means a very serious problem). What is encouraging in this situation is that 82 % of the citizens in Macedonia respond positively that they are willing to report incident of corruption.