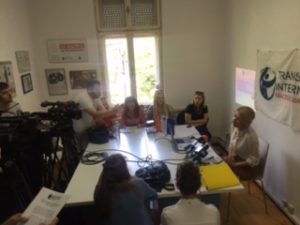 25.04.2018  Transparency International – Macedonia is expressing concerns over non-transparency and other numerous irregularities that characterize the Bankruptcy procedure of Feni Industry AD Kavadarci and point to justifiable suspicion of corruptive behavior by the Bankruptcy Trustee and the Judge leading the Bankruptcy case, for which they have filed criminal charges, as well as to other officials, persons in the banks – creditors and other persons involved in it.
Transparency International – Macedonia closely follows the bankruptcy procedure after receiving reliable information justifying the suspicion of certain irregularities in it, and due to their competencies regarding the investigation decided to file criminal charges against the Bankruptcy Trustee Miroslav Anastasievski and the Bankruptcy Judge Valentina Gjorgievska for the act of misusing the official position and authority.
presentation_feni
Namely, the Bankruptcy Trustee Miroslav Anastasievski on 03.01.2018 published an “Announcement for collecting written offers for concluding a contract for processing nickel ore”, which advertisement contained insufficient specific conditions on the basis of which the selection of offers could be performed and how the selection of the most favorable would be done, but contains conditions for which a certain predetermined legal entity is given an unjustified advantage.
Then on the basis of the selective – made Announcement, a certain candidate is chosen who later concluded an agreement as a representative of Feni Industry AD Kavadarci.
The Judge Valentina Gjorgievska who was supposed to be supervising the work of the Bankruptcy Trustee under the Bankruptcy Law, acted contrary to her competencies, and failed to perform them, and without taking notice of the legal obligations in determining the identity of the other contracting party, both Gjorgievska and the Bankruptcy Trustee allowed the company Global Special Opportunities LTD registered in the Bahamas to acquire an illegitimate Contract which provides a significant material gain for the Judge Gjorgievska, but is damaging for the Bankruptcy debtor, and the Bankruptcy Trustees are disadvantaged.
A complaint has been submitted to the Judicial Council of the Republic of Macedonia to examine the work of Judge Valentina Gjorgievska in the procedure.
Transparency International has assisted in the preparation of the Proposal submitted by the Creditors for the dismissal of the Bankruptcy Trustee.
The proposal for the dismissal of the Bankruptcy Trustee is submitted on the basis of a confirmed and justifiable suspicion that by not entering data in the e-bankruptcy system on a regular basis, the Bankruptcy Trustee acted biased towards certain creditors in the bankruptcy procedure and performed actions contrary to the interests of the creditors or the bankruptcy estate, as well as the unlawful agreement for which criminal charges have been filed.
Transparency International – Macedonia has also received a complaint regarding the case from Cunico Resources, the company which still owns Feni Industry AD Kavadarci. The letter has also been sent to the Transparency International Secretariat (TI) in Berlin, as well as to the office of Transparency International in Brussels. With both offices a contact has been established to verify the allegations.
In the letter, they note that Mr. Kocho Angjushev, Deputy Prime Minister of the Government of the Republic of Macedonia, allegedly orchestrated the entire case in order for the company to end with the GISOL bidder, thus leading to the prevention of the entry of the company Enekod in Macedonia, and thereby protecting the share of the Energy Deliveries Solutions at the market, a company that is in his possession.
By validating the audiatur et altera pars rule, we sent this letter to the Vice Prime Minister Angjushev in order to declare the allegations, and we expect his response in the next few days. A copy of the letter was also sent to the Prime Minister of the Republic of Macedonia, Mr. Zoran Zaev.
Transparency International – Macedonia, as a non-governmental organization, that advocates transparency, rule of law, accountability, and accountable work of the institutions and the suppression of corruption, will continue to closely monitor the bankruptcy procedure of Feni Industry AD Kavadarci and other activities related to it and indicate to any irregularities for which it will receive information that they exist.
Category: News22/04/2018
Сподели на
Share on FacebookShare on Facebook TweetShare on Twitter Pin itShare on Pinterest Share on LinkedInShare on LinkedIn Share on WhatsAppShare on WhatsApp